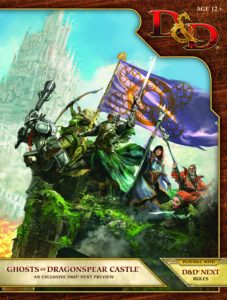 It has been some time since I DM’d regularly in real life. I’ve been longing for some gaming again, but haven’t really had a good opportunity. I ran into some old friends at GenCon, and we got talking again about old games, and decided to game together again, roughly once a month.

We decided to include our kids (save for these friends’ youngest, who is a bit too young). With my best friend tagging along, that’s 8 players total!

Now, I have been a bit intimidated by all this. I haven’t run a game in forever. We’re using the D&D Next rules, so that’s a bit challenging. What’s cool is that the adults are all a bunch of AD&D veterans. In fact, I’m probably the only one who spent any real time with d20. I’m starting to warm up to the rules. In fact, this may be my favorite iteration of the game to date. We will see!

I am running Ghosts of Dragonspear Castle, the D&D Next adventure from GenCon. Last time, we had character creation and a bit of role-play on the road.  zzzz…..   This time, though, half the party got to fight some lizard men while the other half fell into a sinkhole in a marsh that opened up into a shipwreck (that was somehow inland!). It was quintessential D&D at its finest.

Now, I have to admit to not being as prepared as I would have liked. It’s been a busy time of late. However, old instincts kicked in, and I felt like I had my old DM knack back again. We may not have gone far, but we had a rollicking good time.

One extra challenge with this group has been that only one player gave me a character background. That’s the way you’re going to be? Fine! I’ll add stuff myself! I tried to add some things in here and there to make it fun for folks. So, for example, my wife’s character sheet (a pre-gen) had a background of Sailor on it. So I decided, since a river goes by the home town of these characters, that she was a river rat. I also gave her a tattoo (she chose a curved fish).

Highlight of the evening was when my friend Kenneth, playing an elven ranger, fought against a lizard man who had a love for biting off ears and putting them on a necklace. The lizard man did indeed succeed. However, he was near death, and Kenneth’s character ended him. The ear flew into the air. Kenneth’s character grabbed it, put it back in place, and drank a potion of healing! The ear is back on, albeit a little crooked. And that just looks funny on an elf.