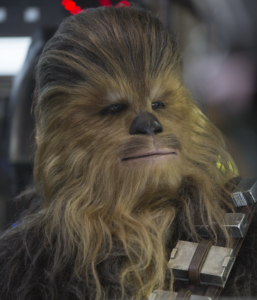 I am assuming at this point that anyone who intended to see Star Wars: The Force Awakens has seen it by now. That being said, SPOILERS BELOW!

The novel Vector Prime by RA Salvatore launched a new era in the Star Wars universe by launching the New Jedi Order story arc, wherein the galaxy is invaded by the Yuuzhan Vong, an alien species who used an advanced form of biotechnology. It was also a huge novel for doing the unthinkable, namely killing a classic Star Wars character, Chewbacca.

Now Disney has relegated the entire Expanded Universe to now be part of the Legends label. Chewbacca’s death is no longer part of continuity. It was a huge milestone, of course. There was impact. The universe was a dangerous place, and Han’s character had to grow.

In The Force Awakens, the opposite happens. Han Solo dies, leaving Chewbacca to carry on. Both scenarios focus on how best friends are torn apart by death, and how the other copes. While both scenarios for character growth are appealing, the death of Han Solo is more appealing to me. Here’s why.

For Chewbacca, now is the time to grow from being under the shadow of Han Solo (which sounds funny, considering how tall Chewie is!). What will he do now? How will his friendship with Rey develop? Is he now the owner of the Millenium Falcon?

My hope is that Chewbacca grows as the movies continue. This is a great chance for the mighty wookiee to become more than Han’s sidekick. Now is the time for him to be a fully realized character on his own.