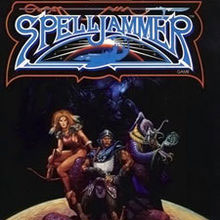 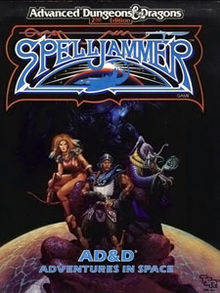 With the licensing of some of Wizards of the Coast’s settings, such as Dragonlance and Ravenloft, there has been talk among fans of licensing out some of the other older settings as well, such as the Spelljammer setting.

As we look at the possibility of licensing the Spelljammer campaign setting, we must look at it through a different lens than in the past. While this is true with the rules, this becomes especially true with the setting.

Spelljammer as a Setting

Spelljammer would have to be looked at in its entirety if licensed, and as one complete setting. You can’t look at it as the Spider Moon setting vs. the classic setting. If you choose one over the other, then you’re bound to alienate a portion of your fan base.

Integrating both works together would, in my opinion, be the way to go. You could use Andy’s Spelljammer rules to get you started, and his sphere (which fans have dubbed Pyrespace) would make a good starting point for adventure. Go beyond that sphere, and then you can tie it all together.

Beyond integrating both of the materials, though, is one more key element. You must build a cohesive setting that has materials that are familiar, but also a setting that has some new, interesting, and exciting elements to it.

Perhaps there are new races, and maybe one of them is trying to conquer the other spheres. Perhaps new spheres and new worlds are being discovered (a great way to integrate the classic and d20 Spelljammer settings). Perhaps there is new magic, new technologies, and new ships.

Through tying together the setting, and building upon it, you’ve accomplished one of the hardest goals.

Spelljammer as a Concept

Spelljammer is more than a setting – Spelljammer is a concept. The idea of traveling from world to world through means of magically powered ships with no futuristic technology whatsoever was a new and fresh one, and ripe for adventure.

While building a setting so that players have a place to adventure is important, it is equally important to present Spelljammer as a concept.

This concept of traveling from world to world through fantastic means should be set up to where you could travel to any world, whether it be a D&D world, or the worlds found in your favorite fantasy novels.

Spelljammer is a world that has infinite possibilities. So much can be done with the concept of fantasy space travel. By presenting a cohesive setting while also allowing Spelljammer to be a tool added to any fantasy setting, you ensure your road to success.