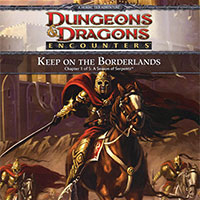 For the first time tonight, I got to play Encounters. This season, the adventure is none other than the classic Keep on the Borderlands. I had never played it before, so I was excited to do it.

My friend Curtis and I were it for our table, so we were going to play two characters each. Another group was also short, so they combined us. What’s funny is that we had a lot more role-playing when it was just me and Curtis. The others were probably half our age (or close to it) and only out for the combat. One guy was metagaming like crazy, and another guy kept rolling his eyes any time anyone else did something.

We basically had a bit of setup, then proceeded to the encounter. We battled some dragonborn and various other reptilian creatures, all servants of Tiamat. The DM was a lot of fun, and pulled no punches.

For tonight’s game, I played the pre-generated fighter, Quinn. Quinn utilizes the new knight build found in Heroes of the Fallen Lands. I have to say, the pre-gen felt like a knight to me. Of course, I played up the part. One might even say I hammed it up.

At one point, I had a battle with a monster that kept trying to throw a net over me. He got me in a pit, but I climbed out. Another player moved him into the pit. I went all Hollywood, and jumped in after the monster, pressing my advantage. Eventually, I defeated him.

I have to say that I really enjoyed playing the Essentials fighter. It felt more like the basic fighters of prior editions. Yet the cool stance and aura abilities made for some fun possibilities and nice visuals. I miss having the daily power, but the rest made up for it.

While the Essentials fighter was good, I can’t say that I was terribly enthused about Encounters. It’s a neat idea, but the name is self-explanatory. You’re just playing encounters. Our DM commended the role-playing that Curtis and I did and said that they didn’t have that much role-playing the entire time they did the Dark Sun encounters. I just found that sad.

Now, I’m debating on whether to go back or not. Did I have fun? Yeah, it was a good time. But it wasn’t a great time. I haven’t made any decisions yet, but I think I prefer games where we can get into our characters a bit more.