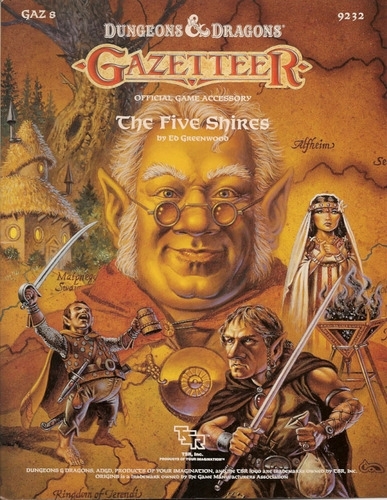 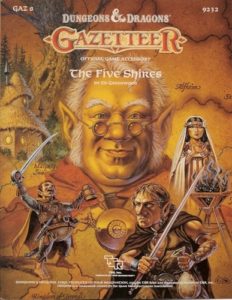 Years ago, when I was first playing D&D, I went with a friend of mine over to play with a group that he played with. It was a large group, where it seemed that everyone had multiple characters they were playing at once. In retrospect, the whole situation was ridiculous. I was playing my second ever character in what would be, for me, a one-shot – and I was overwhelmed.

My character was a halfling paladin, a prince of a land known as the Five Shires. It was about to be invaded by orcs, so as all good adventurers do, we abandoned the kingdom to go adventuring for something long lost that would save our kingdom. Huzzah! Unfortunately, I had to call the night short and never saw the finale.

Something about that night stuck with me. The name of The Five Shires haunted me. Obviously, it was an homage to The Hobbit, which I read around the same time. After years of searching, I eventually found the module, and have now found it on DNDClassics.com.

I recently saw The Hobbit: The Battle of the Five Armies, and my thoughts wandered once again to The Five Shires. Much has changed since I first began playing in 2nd edition. It’s 5th edition now, and there are new tools to use and new ideas to explore.

For example, I’m toying with the idea of creating a halfling warlock with an infernal pact, then tying that concept in with blackflame. Blackflame, in short, is an odd sort of energy. It’s fire that deals cold damage, and burns ashes. I haven’t worked out the details yet.

Likewise, I’m just jazzed about halflings in general right now. And not the genericized halflings of D&D. I’m talking about hobbits, their pastoral lifestyles, and hobbit holes.

As I was looking at the history section of The Five Shires on DNDClassics.com, this section caught my eye.

“Sure. Superimpose the Luiren cities and government structure, shift places ‘just a little’ to make room for them, and, yes, it works admirably for that. Almost as if someone designed it that way.”

Needless to say my purchase of The Five Shires led to me getting the 2e and 3e versions of The Shining South so that way I could learn more about the halfling lands of Luiren.

Where is this leading? I’m not quite sure yet. There are so many possibilities, and I want to explore them all!

What I can tell you is that there is a lesson here worth learning. Even a product that is 27 years old can still inspire the imagination today. So take a look around and see what products from yesteryear might spark the old imagination today.

One thought on “Return to the Five Shires”