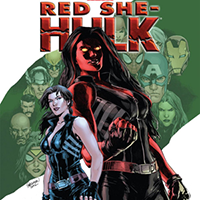 When I first heard that Betty Ross was the new Red She-Hulk, my initial reaction was to roll my eyes. I mean, c’mon. She’s a support character, not a main character. She’s Bruce Banner’s love interest! It’s a trend I have noticed a lot, where supporting characters are suddenly heroes on their own. I am concerned with this trend, as every hero needs a support crew.

Yet I had to ask myself if there was something more to this. So I picked up Red She-Hulk – Volume 1: Hell Hath No Fury. I have to say that I was pleasantly surprised.

As I mentioned above, Betty Ross was a supporting character. She’s probably been everything from the damsel in distress to part of a love triangle between Bruce, herself, and Glenn Talbot, etc. etc. While this sort of thing worked in the 60s when the Hulk was created, it’s a dated concept now. Anyone remember when General Thunderbolt Ross hushed his own daughter for interrupting “man talk?”

In other words, Betty Ross is completely boring. Oh, she’s had her moments, but has she ever stood out on her own? Enter the Red She-Hulk. This is Betty Ross, transformed into a Red Hulk, much like her father. Suddenly, she has gone from a supporting character to being in the spotlight. For the first time, she seems interesting.

And yet I have to wonder if we have too many Hulks running around. Two Hulks, two She-Hulks, and how many other spin-offs? Some of the naming conventions are weird too.

While that criticism may hold some water, I think the pros outweigh the cons here. Betty Ross, for the first time, feels like a fully-developed character. I look forward to reading more about the Red She-Hulk.